Ever since the implementation of the Deficit Reduction Act of 2005 (“DRA 2005”) elder law advisors have been informing clients that Medicaid asset preservation planning using gifts to family members has become more complex. While many people believe that DRA 2005 was the death knell for such planning, in fact one may still preserve assets using a gift giving strategy.

Under prior law it was a simple matter to transfer assets and incur a period of ineligibility – one is ineligible for Medicaid one month for every $4,300 transferred under Maryland law – and then pay privately at the nursing home during the resulting ineligibility period. After DRA 2005, however, the period of ineligibility does not begin to run until the individual is out of money, resides in a nursing home, and otherwise qualifies for Medicaid. What this means in essence is that gifts other than a gift of all of one’s assets while one is in the nursing home could be problematic.

In the example reproduced below, which is based upon a number of assumptions, including the reasonable assumption that the parent in the nursing home will incur costs of $5,000 in addition to her monthly income for nursing home care, one can see that such planning yields the same result under DRA 2005 as it would have under the prior law. However, the methodology employed to achieve such result is different under DRA 2005.

The new procedure requires that the nursing home resident file two instead of one Medicaid application. Moreover, great care must be exercised in the return of gift procedure utilized to effectuate the end result of asset preservation. Suffice it to say that it is no longer easy for the lay person to engage in such asset preservation planning without expert guidance. 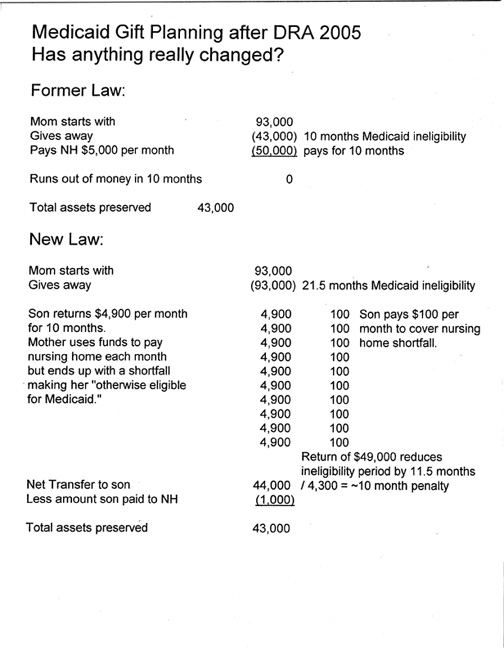 We invite you to contact the Gatesman Law Office to see if such strategy may be useful for your family or to learn more about asset transfers after DRA 2005.

Maryland Elder Law is the website of Attorney, William M. Gatesman, licensed to practice law in Maryland and D.C. Mr. Gatesman serves clients in all Maryland counties, with offices in Montgomery, Howard, Frederick, Baltimore, and Washington counties.   Mr. Gatesman is available for house calls upon request.

Our Most Recent Articles